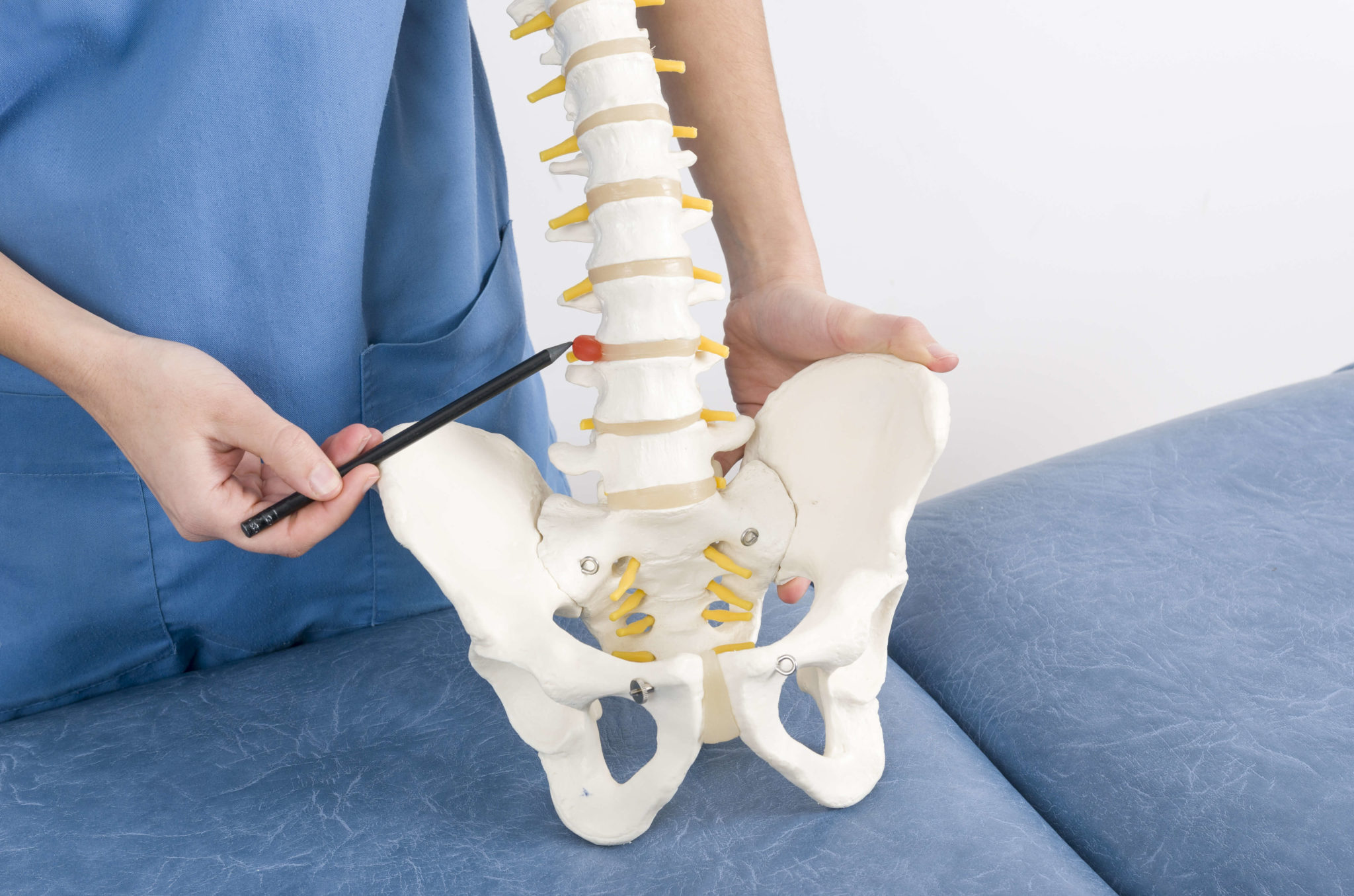 Many people have back pain that keeps on returning. Usually it is hard to say what the exact cause is. But if you have pain that radiates down your leg and into your foot, it may be a sign of a slipped spinal disk, or “herniated disk.”

A slipped disk can be very unpleasant. But the good news is that the symptoms usually go away on their own within less than six weeks in most people with this problem. But not everybody who has a slipped disk will have symptoms.

A slipped disk can cause very sudden and severe shooting pain. Slipped disks in the lumbar region are the main cause of sciatica (sciatic nerve pain). Sciatica describes pain that radiates down one leg and into the foot. As well as the typical radiating pain, a slipped disk can also lead to pain in the low back region.

In rare cases, numbness in the buttocks or signs of paralysis may develop in addition to the pain and restricted movement. These symptoms are signs of a more serious problem, like nerve damage. Immediate medical attention is needed if the functioning of the bladder or bowels is affected too. That is called “cauda equina syndrome” (CES), and is a medical emergency.

But a slipped disk doesn’t always lead to noticeable symptoms. This can be seen in studies in which adults who didn’t have back pain were examined using magnetic resonance imaging (MRI). More than 50 out of 100 people who were examined had a bulging disk. In about 20 out of 100 of them, the core of the disk had already broken through several layers of its casing or had even entered the surrounding tissue, but without causing any noticeable symptoms.

In most people, slipped disks are the result of wear and tear. Over the years, the spinal disks lose their elasticity: Fluid leaks out of them and they become brittle and cracked. These changes are a normal part of aging, and already start happening when we are young. But not everyone’s spinal disks age at the same pace. Very rarely, an accident or severe injury might also cause damage to a spinal disk and leave it herniated.

Spinal disks act as shock absorbers between the vertebrae in our spine. If a spinal disk is no longer able to bear the strain, it can result in a slipped disk. The associated pain probably arises when part of the spinal disk pushes against a nerve in the spinal cord. 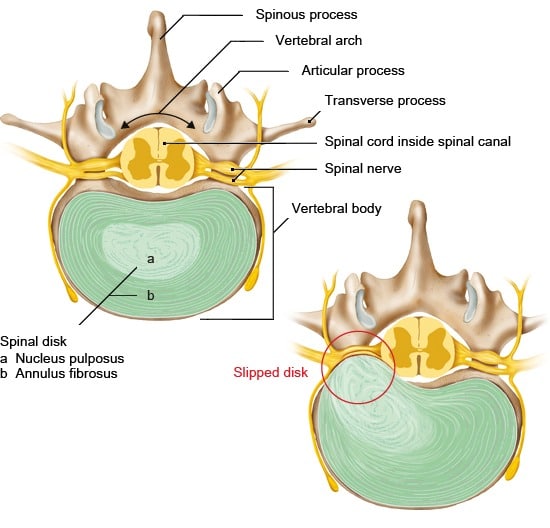 When herniated disk tissue irritates a nerve root in the region of the lumbar spine, it often causes typical sciatic pain. The nervesthat run through the spinal canal connect to the sciatic nerve at the pelvis. The sciatic nerve then runs down the legs. As well as being painful, an irritated sciatic nerve can also cause pins and needles and numbness. 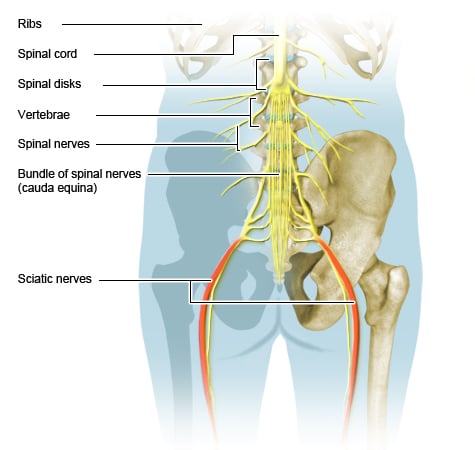 These categories reveal little about what symptoms occur or how severe they might be. But knowing what type of slipped disk someone has is important for the choice of treatment and understanding how the condition might go on to develop.

It is estimated that 1 to 5% of all people will have back pain caused by a slipped disk at some point in their lives. Slipped disks are more common in people over the age of 30, and are about twice as common in men as they are in women.

Pain and restricted movement caused by a slipped disk usually subside on their own within six weeks in 90 out of 100 people with this problem. It is believed that, over time, the body gets rid of part of the bulging or prolapsed tissue or that it shifts position so that the nerves are not irritated anymore.

A painful slipped disk can go on to develop in very different ways: The pain can start very suddenly, and then disappear again very quickly. Some people have pain that lasts a long time, while others have it again and again.

If the symptoms last longer than six weeks, it is less and less likely that they will go away on their own or that non-surgical treatment will help.

Doctors are usually able to determine what is causing acute back pain by asking a few questions and performing a physical examination. X-rays are of little use in the diagnosis of a slipped disk. Other imaging techniques such as magnetic resonance imaging (MRI) are only needed in the following rare cases:

So if your doctor is reluctant to use imaging techniques at first, there are probably good reasons: The images may show a supposed cause of back pain that actually has nothing to do with the symptoms. This kind of misdiagnosis can then result in unnecessary treatment that may itself be harmful.

Even severe sciatic pain can subside on its own after a while. Until it does, various kinds of pain relief treatment can help to cope with the symptoms. But no treatments have been proven to significantly speed up recovery. Most of the work is usually done by the body itself.

If severe sciatic pain persists for over six weeks and is definitely being caused by a slipped disk, surgery may be an option to try to relieve the pressure on the affected nerve. Surgery is also always done if the nerves are so severely affected that the bladder or the bowel is no longer functioning properly or certain muscles have become very weak. But that is rare.

The goal of rehabilitation is to improve the symptoms and restrictions resulting from a slipped disk, and strengthen the muscles in the torso in order to improve the stability of the spine.