A new study suggests that people who suffer from chronic pain may benefit from drinking in moderation. This was found to benefit people with fibromyalgia and depression.

The study was published in Pain Medicine Journal in March, entitled “Moderate Alcohol Consumption is Associated with Reduced Pain and Fibromyalgia Symptoms in Chronic Pain Patients.” Its goal was to find the correlation between pain, fibromyalgia symptoms and moderate alcohol use.

According to the Centers for Disease Control and Prevention, fibromyalgia affects four million Americans, or around two percent of the population. The disease is characterized by chronic widespread pain, fatigue, sleep problems, anxiety and tender points. Women are twice as likely than men to have the condition, the CDC said.

Many studies have found that moderate alcohol consumption has many benefits, including protecting the heart, reducing depression, diabetes, dementia and improving quality of life.

One study found that moderate drinking prevents the onset of chronic pain; however, if the person is already experiencing pain, alcohol will not halt it.

For this study, researchers surveyed 2,583 chronic pain patients treated at the University of Michigan pain clinic. 23 percent of those surveyed reported drinking (592 people), and eighty-five percent of the responders classified themselves as moderate drinkers (502 people).

The dietary guideline for Americans defines moderate drinking as up to one drink per day for women, and up to two drinks per day for men.

The National Institute on Alcohol Abuse and Alcoholism defines binge drinking as four drinks for women and five drinks for men within a two-hour period.

“Our hypothesis that chronic pain patients who drink moderately would report less pain and symptom severity compared with nondrinkers was supported,” the study researchers wrote.

“These data suggest that the effects of moderate alcohol consumption on [fibromyalgia] symptoms have important clinical implications for chronic pain patients in general,” they added.

Before drinking alcohol, it is, of course, important to check any contraindications with any medications that you might be taking. The key to the study is drinking in moderation, and not overdoing it. If you have questions about alcohol consumption and how it might impact your body, schedule an appointment with your doctor. 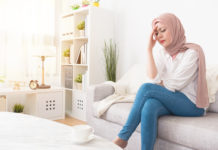