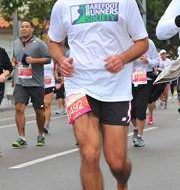 Even if you’re not a runner, for the past few years you couldn’t attend a race expo or pick up a fitness or running magazine without hearing about “barefoot running” and its partner trend: “minimalist” shoes, most famously those made by Vibram, which make your feet look like, well, an ape’s. Barefoot runners claim that because this type of shoe closely approximates how humans were meant to run, it reduces the possibility of injury. Save $100 on a pair of shoes and increase the chances you’ll be a pain-free runner? What’s not to like?

The research has never been decisive on this point, and a new report in the journal Footwear Science offers a critical look at the evidence for the risks and benefits of barefoot running. The report’s authors, Benno Nigg and Hendrik Enders of the Human Performance Laboratory at the University of Calgary, in Alberta, Canada, compared running barefoot and with shoes against various factors, including how frequently runners were injured while wearing shoes and not.

It’s a question worth asking, because there are more runners than ever. At least if you go by the stats for people entering races such as marathons (26.2 miles) and half-marathons (13.1). Running USA reports that in 2011, the most recent year for which data are available, a record 13.9 million people finished road races a 170 percent increase from 1991. The most popular distance was the 5K (3.1 miles).

That’s a lot of potential injuries. And getting hurt isn’t uncommon in runners, though an older Dutch study found that up to three-quarters of injuries result from overuse related to constant repetition, which means that simply mixing up training can keep you from getting sidelined.

A person running barefoot is more likely to land on the forefoot (a “forefoot strike”), while runners who wear shoes will probably use a rearfoot strike. The new study’s authors note that though “the barefoot forefoot strike has a much lower impact force,” whether this translates into fewer injuries is uncertain.

In fact, in looking at the evidence including a study from the 1980s that helped give rise to the barefoot-running phenomenon the authors of the new study in Footwear Science conclude by writing, “We do not know of any publication that provides hard evidence that people running barefoot have fewer running-related injuries than people in running shoes.”

What may be more important is to consider what works for you as a runner. For example, running on hard surfaces such as asphalt or packed dirt are likely to be different from running on grass or sand (though sand may actually increase the risk for Achilles tendon injuries, the new study’s authors noted).

Similarly, your own running style how you land, and your pronation or neutrality as you run, as well as your stride, relative strength and fitness, and how often you run can all affect your risk for injury.

If you’re new to running, you may be interested in a Danish study that looked at what puts novices at risk for an injury: The researchers followed 930 beginners, 254 of which had a running-related injury. What made it likelier someone would get hurt while running? Being between 45 and 65, having a previous injury unrelated to running, and being overweight.

Have you tried running barefoot? Have you experienced any running injuries? If so, how did you deal with them? If so, please join our community today to share.