Teri Robert, a prolific writer and advocate on migraines who lives with the chronic condition herself, says what we could use more of are better headache doctors. 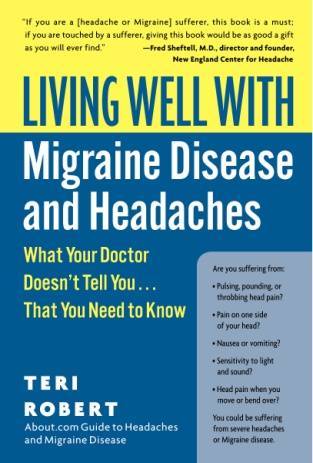 Teri Robert knows from migraines. She’s had them since she was six years old, has written a book on the topic (Living Well with Migraine Disease and Headaches), runs a popular blog, and is chair of the American Headache and Migraine Association. So when this decade-long patient educator and advocate talks about these killer headaches, there’s no doubt she knows what she’s talking about.

PainResource sat down with Robert recently to talk migraines.

PR: What still needs to be done, or improved upon, when it comes to helping people with migraines?

Teri Robert: One thing that needs to be improved upon and this is widely recognize is more and better physician education in medical school. The World Health Organization issued a report in 2011 and I think that said that general physicians gets one hour of education on all headache disorders combined while in medical school. In neurology they get a grand total of four hours. And they’re so slow to update the curriculum that what they are taught isn’t current … We go to doctors and the chances are that the patient who’s half-educated knows more than the doctor.

A family doctor recently told a patient that if they don’t have aura they don’t have migraines. Which is not true. Only 25 to 30 percent of migraine patients have aura. [Another doctor I heard about recently] told a patient that if triptan medications [like Imitrex] don’t work it’s not a migraine. Not true; those medications don’t work for all of us [with migraines]. Doctors neglect to teach patients that if we take these acute medications, whether prescription or over-the-counter, more than two or three days a week that can cause medication overuse headache … So many people come [to their doctor] and say, ‘I keep taking my Imitrex, but my migraines are more frequent’ … The only way to [get over the medication overuse headaches] is to quit taking the medication and just suffer through it.That’s a problem for those with chronic migraine those who have them more than 15 days a month. I’ve been there…it’s really hard on the patient.

A doctor said to me, ‘I just can’t get the time I want for patient education.’ That’s where people like me come in, my role is to teach patients enough about migraine or whatever headache disorder and how to work with their doctors so they can work as treatment partners with their doctor and make treatment decisions together. My doctors don’t make decisions for me, they make decisions with me.

You can’t call your doctor every time you have a migraine or headache … I want to get [people with migraines and other kinds of headaches] comfortable asking questions; some people just won’t question a doctor. And they won’t question if the doctor says something that doesn’t sound right to them; they can’t do it. I’ve said to people any number of times: The person with the most at stake gets to be in charge. That’s not the doctor. You need to take charge of your health and healthcare.

PR: So how do you find a doctor who will work with you, who really understands this chronic condition?

There’s also a new subspecialty certification in migraine and headache medicine, through the United Council for Neurologic Subspecialties … I think one of the best ways is to find someone that someone you know has seen. I don’t suggest that people look for a clinic; you need to choose a specific doctor who you want to see. The doctor makes the difference, not the clinic.

PR: How did you find your own specialist?

TR: When I was at my worse in 2000 I probably had seen every neurologist within 100 miles of my home … I looked online and had accepted a position with About.com to write a column about migraine and headache. I started meeting people and they told me about Dr. Young at the Jefferson Headache Center in Philadelphia. That was 8 hours from [where I live]. At that time I didn’t really care. I made an appointment with him. My husband and I would drive to Philadelphia, stay in a hotel, see him the next day, and come home. One of the first things he said to me was, ‘I won’t give up on you if you won’t give up on me.’ We made some progress in the first six months, but I didn’t make ultimate progress until after 4 1/2 years. I would spend five or six days in bed every week. [After working with him for years], I would get migraines every one to two months.

It didn’t last forever, though. I had to quit taking preventive meds and when I did that my migraines went chronic again. Now I have a specialist that’s just two hours away. I have migraines about eight days a month, but that’s better than 25.

PR: You follow what’s happening in migraine and headache news and research closely. What are you most excited about?

TR: One thing I’m excited about is the campaign to raise $36 million for migraine research. One of the problems of developing treatments is that we don’t know the path of physiology of a migraine. It was thought that blood vessels dilated in brain, and now they’ve discovered that cortical spreading depression occurs before any vascular involvement. I’ve seen PET scans of people having a migraine with no vascular involvement. That’s real progress in getting this figured out. The work that Dr. Andrew Charles at UCLA is doing that’s just invaluable research.

[Dr. Charles and other migraine researchers] aren’t just brilliant, but nice, kind, caring men, too. They really care about these patients. Hopefully there will be a breakthrough for treatment for acute and preventive treatment involving CGRP calcitonin gene-related peptide. That looks promising.

Also, triptans like Imitrex have contraindications for anyone with stroke or heart issues so that leaves out a big part of the population. If that research pans out [to develop a drug that migraineurs with these conditions could safely take], that would be a huge step forward for those people.

There’s a big debate in the field about whether a couple of surgical procedures being done should be considered, or should they be a last resort. This was a debate at the International Headache Congress in June. One of the surgeries cuts muscle around nerves nerve decompression surgery.

Then there are neurostimulators, implantable devices that are not FDA approved for migraine, so most insurance companies won’t pay for them. They are also being over-hyped and they too are not cures and don’t stop all migraines. I was talking to a woman this week and she has one and she’s grateful for it, but she still has migraines. There’s no quick fix, there’s no magic pill, there’s no cure for this disease and it can take time, but if you get to the right doctors, you can get your trigger management plan in place until you get your life back.

Too often people don’t take into account what their triggers are. If they know something [like a food or alcohol] is a trigger and they didn’t avoid it, that’s on them.

PR: Tell us more about the 36 Million Campaign.

TR: The fact is that we can’t sit back and wait for the government to increase research funding. We’re going to have help raise the money. We want to raise an average of $1 per migraineur (there are approximately 36 million Americans with migraines). If everyone would give what they can, we’d get there. This is being led by David Dodick, M.D., a neurologist at the Mayo Clinic and president of the American Headache Society, and Cindy McCain is a spokesperson.

I don’t think they’ve narrowed [a research agenda] down yet … As far as I understand, Dr. Dodick’s goal is to get $36 million for basic research … There are over 100 medications that people use for migraine prevention, but none of them not one was developed for migraine. They were all “hand-me-down” drugs that were developed for things like heart problems or seizures.

PR: What’s the question about migraines you get more often than any other?

Three migraineurs have taken their lives this summer. And it’s mainly losing hope. We can’t let this disease win. We can’t cure it, but getting to a doctor who really knows what they’re doing, and by having stubbornness and patience, we can manage it.

I know what it feels to feel hopeless like that. In 2000 that was me. I couldn’t work, I had two kids at home, I couldn’t do things with my kids or my husband; migraine had taken my life. I took it back.

Four of my grandchildren have migraines. I’m bound and determined that things will be better for them than for me. They will be better.

How do you cope with your migraines or headaches? What advice have you gotten or shared that has helped the most?