What is Apple Cider Vinegar?

Apple cider has a brownish color and a strong scent that might pucker your mouth or make your eyes water. According to the book Apple Cider Vinegar, written by the Bragg family, producers of Bragg’s Apple Cider Vinegar, if it has a strong, pungent odor, that’s a good, natural sign that you have the right stuff.

Not just any apple cider vinegar will do, however. Apple cider vinegar health proponents recommend opting for organic with “the mother,” which is the miracle, seemingly cure-all substance within this aromatic elixir.

How is Apple Cider Vinegar Used?

Apple cider vinegar has been consumed for its health benefits for over 5,000 years. In ancient Greece, Hippocrates, the Father of Medicine, even prescribed it mixed with honey as a cure for coughs and other ailments. One study found that consuming two tablespoons of apple cider vinegar per day over a 12 week period resulted in around four pounds of weight loss, with no other modifications to diet or lifestyle.

Apple cider vinegar has shown to treat acne and even reduce scarring. It contains specific components, including acetic acid, lactic acid, succinic acid and citric acid, all of which can slow the progression of Propionibacterium acnes, the strain of bacteria that’s responsible for causing acne.

According to Apple Cider Vinegar, a recent study found that a 5 percent solution of apple cider vinegar kills 99 percent of bacteria, 82 percent of common mold and 80 percent of germs and viruses. Many people use it as a natural cleaner.

One study found that consuming apple cider vinegar decreased blood sugar levels by an average of 31 percent in participants after they consumed white bread.

Although more research is needed, preliminary studies suggest that the acetic acid in apple cider vinegar may reduce LDL (bad) cholesterol levels in humans, and may even increase HDL (good) cholesterol.

By introducing more acid into the digestive tract, apple cider vinegar may help to prevent acid backflow in the body.

Taking 1-2 tablespoons of apple cider vinegar each day may improve your gut health, similar to other fermented foods such as kombucha or kefir.

If your dog or cat gets fleas, the chemical-filled soaps at the pet store can actually be harmful to their skin. If you’re looking for a more natural remedy, try this instead: mix equal parts apple cider vinegar and water in a spray bottle. Apply to the fur once per day until the fleas are gone.

Stress and exercise can cause lactic acid to build up in our bodies, causing fatigue. Apple cider vinegar, specifically the animo acids contained within, can hep to combat this. Additionally, apple cider vinegar also contains potassium and enzymes that can reduce tiredness as well. 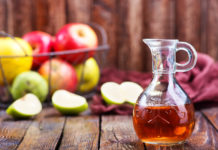 The Natural Healing Powers Of Apple Cider Vinegar For Back Pain