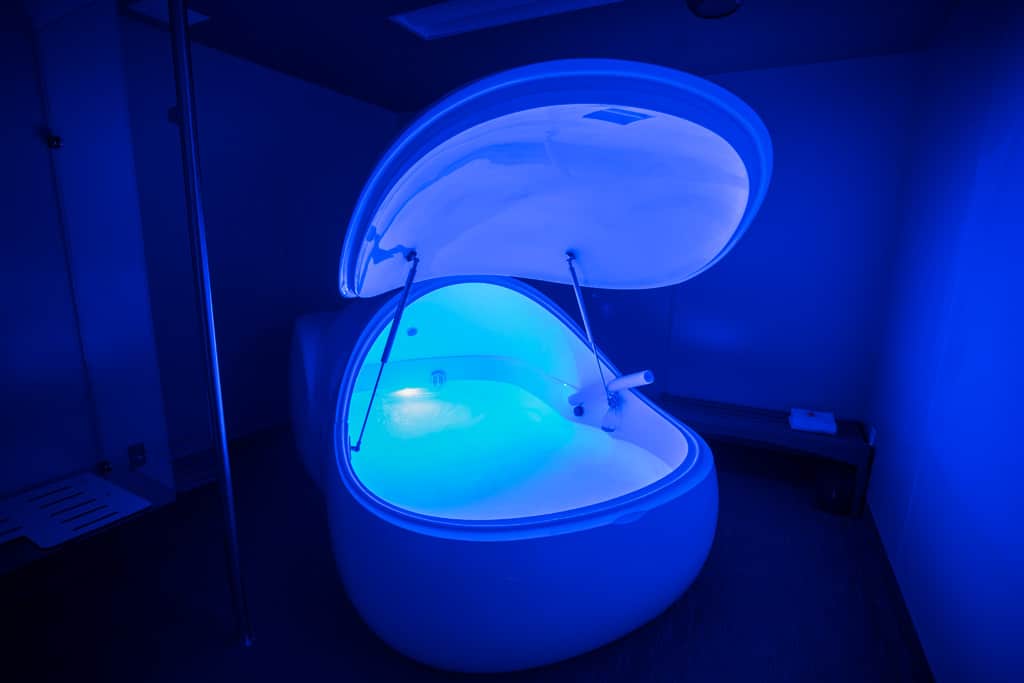 If the idea of floating weightless sounds appealing – as if your body is drifting through time and space – then float pod therapy may be exactly what you need to ease your chronic pain symptoms.

First of all, float tank (or float pod therapy) is for real. It’s the idea that isolation and tranquility go hand-in-hand as effective way to manage pain. According to a recent article in Daily Mail, “Participants’ stress, depression, anxiety and pain significantly decreased while their optimism and sleep quality significantly increased.”

While neuroscientists have been exploring the use of sensory deprivation to aid in healing for centuries, flotation tanks are a relatively new trend. The big question is do they really work? And how?

First of all, a float tank is exactly what you’re picturing. It’s a big pod – usually shiny and white – filled with water and Epsom salts. It looks like something you’ve seen in a futuristic movie about space travel. It’s about 8-9 feet long and 3-4 feet wide – larger and taller than a tanning bed. Pods have a hatch door that you can close for isolation. You simply get in it and float lying down in a horizontal position for about 60 minutes.

According to a float tank owner in an article in the Calgary Journal, what’s happening in the pod is subtly powerful. “We reduce sensory input to the body — so that’s no lights, no sound and we heat the tank to our body temperature.” This specific type of thermal regulation removes sensory input, so your body can “enter a ‘therapeutic’ state of healing. Similarly, it allows the brain reprieve to “slow down and take a break.”

One chronic pain suffer described her experience in the Daily News Journal, “I floated for the first time and realized my pain level had gone down significantly. … I was able to finally do normal things. … And for those with chronic pain, normal feels like a miracle. … It gave me back my life.”

Another chronic pain sufferer said float tank therapy freed him from his “shackles” of pain. According to an article in Ontario’s Durham Region, Brent Giroux was in a horrific motorcycle accident in 1987 that put him in a coma for two weeks. When he finally woke up, he was paralyzed for two months. Desperate for relief, Giroux tried floatation therapy and he was amazed, “My first thought was ‘I think I’m dead’ because for the first time since 1987, I was pain-free. It’s a whole new world being pain-free … it’s like ‘I can have a life.’”

Extensive research has been conducted to figure out if flotation therapy actually works, as in is there a scientific explanation? The results seem to indicate it does work over time by adjusting the brain’s amygdala. According to Men’s Health, “In a series of studies led by neuropsychologist Justin Feinstein, researchers monitored participants’ brain activity before and after three 90-minute float sessions. They found that the amygdala, the area of the brain responsible for regulating the body’s ‘fight or flight’ response, basically shuts down after floating.”

If you’re wondering about trying a float tank, that’s up to you. Every chronic pain sufferer travels their own unique path and you might not know what brings you relief until you find it.

Have you tried flotation therapy for pain? How was your experience? Let us know in the comments section.