How one dog with the disease became an Internet sensation 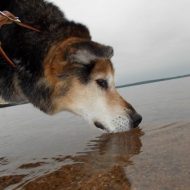 Swims in Lake Superior were Schoep the dog’s daily arthritic therapy. After Schoep and his owner, John, were photographed during a session in which Schoep was cradled in John’s arms as they glided through the cool, healing waters, tens of thousands of people commented. Soon a Facebook page was created, dedicated to the two.

Schoep, age 20, died earlier this month. News of his death brought an outpouring of worldwide condolences, including from people who shared similar stories of caring for an aging dog riddled with arthritis.

What touched so many people was John’s devotion to his canine friend. Instead of giving up and having Schoep euthanized, John took Schoep swimming in the lake in front of his home in northern Wisconsin. The swims allowed Schoep to move without straining his aching joints. When the photo of Schoep in John’s arms went viral, people saw firsthand how to heal a dog.

According to Mary Straus, owner of DogAware.com and a contributor to The Whole Dog Journal, Swimming is an excellent exercise for dogs with arthritis, as it is non-weight-bearing, so your dog can exercise vigorously without damaging his joints.”

In one of his Facebook posts, John said he believes the sessions in the water added about a year and a half to Schoep’s life because they slowed the progression of his condition and relieved his pain by promoting a normal range of motion and preventing stiffness. With the stiffness gone, Schoep could go on walks, something he couldn’t do without discomfort before he started swimming. 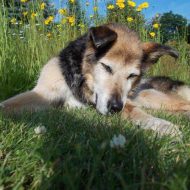 Moderate, low-impact exercise, such as walking or swimming, is important for dogs with arthritis, as regular exercise will help maintain flexibility and well-developed muscles help to stabilize the joints, said Straus.

Extra weight increases the load that the animal has to bear on a joint, making movement even more painful, said Dr. Jennifer Coates, a veterinarian. Exercise stimulates the production of high-quality joint fluid, which lubricates the joint and nourishes cartilage.

While it might seem overwhelming at first, you can help a dog with arthritis in steps and create a regimen that is doable for both of you.

Some things to consider when developing a plan:

Weight: A healthy weight is critical for a dog with arthritis as it lessens pressure on the dog’s joints and hips. One option is to limit grains and starchy carbohydrates and increase the amount of protein in your dog’s diet.

This can be done by feeding a better-quality food, by using canned instead of dry foods, by adding fresh foods such as eggs and meat, or by using food prepared at home, said Straus. Such a diet can consist of cooked chicken or salmon with vegetables simmered in a low-sodium chicken or vegetable broth. 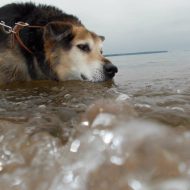 Exercise: Schoep’s swimming sessions improved his comfort and quality of life by allowing him to exercise without taxing his joints. Swimming also can increase a dog’s heart rate, which in turn improves blood flow and lung capacity, without the joint damage running or walking can do. If you don’t have access to a private pool, lakes are recommended. (Rivers are considered dangerous as they have strong currents under the surface.) And check to see if canine hydrotherapy is offered in your area.

Tell us: Do you have an aging dog that you care for? How do you lessen your dog’s pain? 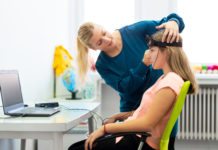 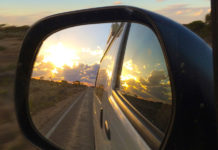 5 Tips To Help You Stop Car Back Pain