According to the World Health Organization, every year there are 15 million babies born prematurely across the world. To break it down, that is more than one in 10 babies.

President Franklin D. Roosevelt created the organization in 1958 under the name The National Foundation for Infantile Paralysis.

According to the March of Dimes organization, its mission was first to combat polio by helping to uncover a polio vaccine. The mission later changed to preventing birth defects and promoting healthy pregnancies. 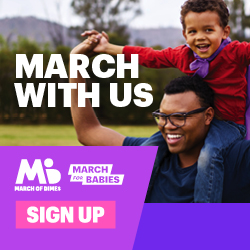 For the parents, grandparents, aunts, uncles and family members who march across the country and volunteer their time, this organization means so much to them.

We sat down with four families to discuss why they march, and learn more about the organization that is near and dear to their hearts.

Camperlango said she marches for her son Dean, and all other preemie babies. ​

​Dean was born at 34.5 weeks, and we’re not sure why. Right after he was born, he has whisked away to the NICU (Neonatal Intensive Care Unit). He was severely jaundiced, and did not have the stamina to stay awake for a feeding. I was discharged two days after giving birth, but Dean stayed in the NICU for nine days. He spent most of his time there under the bili lights and ate via a feeding tube until he was strong enough to breastfeed. Our stay was exhausting – physically and mentally – but we were so lucky to have the support of such wonderful nurses and lactation specialists. ​

​I was in elementary school, and my aunt brought me to her work one day – she worked with Florida Healthy Mothers, Healthy Babies. She and her co-workers were very familiar with March of Dimes, and she was the one to tell me how important it was that we all get a fighting chance at a healthy start in life.

“She was the one to tell me how important it was that we all get a fighting chance at a healthy start in life.”

​March of Dimes provides a support system. Not only can I reach out to other NICU families, the amount and quality of their research is unparalleled.

​With the support of my friends, family and The Bar Method Tampa-Westshore, we’re on our way to meeting our fundraising goal for March for Babies. We just surpassed the halfway mark ($2,500+), and we’ve got a couple of weeks to make it to $5,000!​

​It’s important to me that every mother and child ​be given the best chance at a healthy start in life.

​That March of Dimes is improving the health and livelihood of one of the most vulnerable populations, and that they need our support!​

Shannon and Michael Rainka spoke with us about their son, Henry who was born in 2016, weighing four pounds, 10 ounces.

This will be the Rainkas first-year marching at the Jacksonville March for Babies event on Saturday, May 12th, taking place at Jacksonville University.

I went into labor, but didn’t know that I was in labor for two days. I kept calling my doctor’s nurse, explaining how I felt and what was happening, and I was told: “That’s not labor.”  I finally went to the hospital, and was seven cms. Henry was born via emergency C-section less than an hour later.

I participated in fundraising events at March of Dimes in both high school and college.

The March of Dimes has helped fund the technology and equipment that kept my son alive in his first days.

We are giving back by pledging our support to fundraise for March of Dimes and support their programming.

Preterm birth is too common in our county. There is a need to educate mothers about the risk factors that affect their pregnancies, and how to identify preterm birth in the face of misinformation. There is also a need to improve the already incredible technology and methodologies used to keep our babies comfortable and alive when they arrive too soon.

No parent should leave the hospital without a healthy baby for something as preventable as preterm birth or birth injuries. Moms, especially first-time moms, need the education to identify problems and the support to get solutions. March of Dimes’ training and educational work empowers moms to be their own advocates and get the best healthcare possible.

“March of Dimes’ training and educational work empowers moms to be their own advocates and get the best healthcare possible.”

“Since Erikson was born, this organization has become our family’s mission,” Amanda said. “We are grateful for their service, and want to give back as much as we can.”

Erikson was born unexpectedly at 31 weeks, due to a condition called P-PROM. My water broke with no known cause, and despite attempts to prevent delivery, Erikson arrived that night through an emergency C-section. He remained on a ventilator for 24 hours, and needed to be fed through IVs and tubes for weeks. He remained in the NICU for 51 days until he was able to eat and breathe on his own.

I had seen public service announcements and fundraising efforts throughout my pregnancy, never dreaming that their work would apply to me. When Erikson was in the NICU, I looked up their website, which provided guidance and hope.

Without the March of Dimes, the research and training that saved my baby’s life wouldn’t have been there. Our hospital was well equipped and able to care for him without us having to travel. March of Dimes continues to fund research and support the health of mothers and babies, and without their funding, we may not have had the amazing outcomes for our son that we did.

We created a family team, “Erikson’s Vikings,” last year, and were beyond thrilled how friends and family came together to donate and raise money, as well as awareness of the March of Dimes. This year, we are serving as the Palm Beach County Ambassador family, and are sharing our story with the entire community as we continue to raise funds with our team as we prepare for the March for Babies.

The March of Dimes provides so much more than just funding research to help babies with birth defects and prematurity. The organization also focuses on maternal health to provide the best outcomes of each pregnancy. The community service the organization also provides, such as visiting hospitals and providing parents with support and guidance, is something that means a lot to me as a preemie parent.

Prematurity and birth defects can happen to anyone. The March of Dimes is fighting to stop this, and with the support of the community, more mothers and babies can have the best outcomes possible. I think families need to know that there is such an organization that is fighting for the health of moms and babies.

“With the support of the community, more mothers and babies can have the best outcomes possible.”

Zachary was born in 2017, weighing five pounds, seven ounces.  His mother, Jami Pavich, told Pain Resource that she will march to honor her son and to raise awareness.

Pavich will be participating in the 2018 Southwest Florida March walk on Saturday, April 28th at Centennial Park.

When I was 36 weeks pregnant, I suffered a full placental abruption. I was enjoying friends and family at my baby shower, when I started bleeding heavily, and someone called 911. I was rushed to the hospital. Upon arrival, my placenta had fully separated from the walls of my uterus, Zachary’s oxygen was cut off and an emergency C-section was performed.

When Zachary was born, he was not responsive. His Apgar scores were 0, 0, 4 and 5. Apgar is an acronym that stands for Appearance, Pulse, Grimace, Activity and Respiration. An Apgar score is ranked from 1 to 10, and the higher the score, the better the baby is doing after birth.

After several minutes of resuscitation, doctors finally had a heartbeat, but Zachary’s prognosis was grim. Due to his lack of oxygen, doctors expected moderate to severe brain damage, along with liver and kidney damage. At one week old, Zachary had a perforated bowel, and needed emergency life-saving surgery, which resulted in an ileostomy, a surgical procedure that allows the body to expel waste when it cannot be done normally.  Eight weeks after surgery, a second surgery was performed, and the ileostomy was reversed.

We are grateful, thankful and blessed. Today Zachary is happy, healthy and thriving.

“We are grateful, thankful and blessed.”

As of today, we have raised nearly $5,000 for the March of Dimes. I will continue to support this cause and raise awareness for healthy babies and healthy mothers.

For more about the March of Dimes organization or more about events in your area, visit https://www.marchofdimes.org.