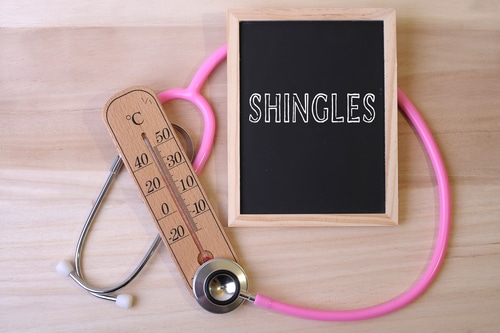 Shingles, also called Herpes Zoster,“zoster”, or “zona”, is a condition that causes numerous painful side effects. It is caused by the dormant Varicella Zoster virus, which hides in the nerves for years following Chickenpox. Shingles can cause a wide array of symptoms affecting the skin & nervous system, commonly including a blistery rash, sores, joint pain, problems with vision or taste, and swollen glands.

The effects on the skin are where the disease gets its namesake: The rash it creates follows dermatomes (patches of skin that follow a single spinal nerve), creating patterns of red, bumpy, blistered patches, resembling the shingles on a house or roof. Though the rash may clear up within a few weeks, many carriers of the virus will continue to suffer nerve pain and peripheral neuropathy for months, or even years, following medical treatment.

Causes and Risk Factors of Shingles

Other factors increasing the risk of contracting Shingles include people who: Shingles can affect anyone, but the chances of contracting Shingles increase based upon whether the patient had previously contracted chickenpox, or if they had never received the varicella vaccine. Shingles itself contagious, especially if the contact is with someone who has never had chickenpox or the varicella vaccine, although in that case, the person would more likely develop chickenpox than shingles.

The most tell-tale sign of Shingles is the blister-ridden rash that forms on the skin. Commonly, the rash appears localized in bands or patches, but sometimes it sporadically pops up all over the body. Like chickenpox, the blisters break causing small sores with a hard crust. Typically, the crust fades away and the sores heal within a few weeks. In some cases, the rash affects the face and can cause Ramsay Hunt Syndrome (see below).

Other symptoms of Shingles include:

Ramsay Hunt Syndrome (RHS) is caused by the same virus that causes shingles and chickenpox and happens when the virus attacks the nerve behind the inner ear, affecting one side of the face and head. It can cause a painful rash anywhere within the head, including the eardrum or ear canal, tongue, roof of the mouth, and on the face.

Severe cases sometimes lead to hearing loss on the affected side of the head, in some cases permanently. The affected side can also lead to a number of issues causing stroke-like weakness.

RHS issues may include:

Sometimes, Ramsay Hunt can also cause vertigo, a sensation of things spinning or appearing blue. In most cases, the symptoms go away within a few weeks. However, in instances of severe nerve damage, the symptoms can prevail for months, if even ever fully clearing up. Treatment for Ramsay Hunt Syndrome follows a similar chain of medications and other methods used for treating Shingles.

To help further control pain and itching, hydrocortisone, calamine lotion, and oatmeal baths may provide relief.The first method of treatment should be administered as soon as possible, preferably at the first sign of pain, burning, or rash. This would include anti-viral medications by pill or IV. There may also be an administration of corticosteroids for swelling, antihistamines to aid with itching, and pain medications to control pain. In some cases, doctors may also prescribe capsaicin creams to prevent neuralgia.

Since the rash is highly contagious, great care should be used in decontaminating bed linens and other possessions affected by Shingles.

There are Shingles vaccinations available, although they are not typically administered to those under 60 years of age. If you have not been vaccinated, you should take great caution when exposed to anyone with shingles or chickenpox, as it is highly contagious, especially when the sores are oozing. However, regardless as to whether or not someone has had chickenpox or the vaccine, they can still be susceptible to catching the virus. 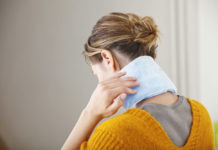